Chinese communities throughout the world have been celebrating century-old traditions each Lunar New Year. One of the more popular symbolic customs is making dumplings to ring in the new year. Commonly called jiaozi, Chinese dumplings are a year round favorite, but hold greater significance during Chinese New Year. Historically, dumplings represented the symbol of wealth and prosperity due to their resemblance to little gold ingots (the currency used during the Ming Dynasty). Some take the tradition further by hiding a clean coin in the filling of one dumpling, so that the lucky person who finds it is deemed to have even more good fortune in the coming year.

Varying widely from the family’s region of origin, most Chinese families have their special recipe and preferred methods of making jiaozi. Chinese dumplings are typically made of a simple fillings of minced meat, seafood and vegetables, or a combination of ingredients wrapped in a thin skin of wheat dough. You can be ambitious and make your own dumpling skins; however, I prefer to save time in the kitchen and use a variety of wrappers available at Asian markets, leaving me more time to savor the tasty dumplings.

There is no set rule as what to fill the dumplings with or how they should be shaped. Yet, the typical ways to prepare new year dumplings are to either boil them like ravioli or pan sear and steam them, otherwise known as pot stickers. My dumpling recipe can be prepared either way and is filled with pork and cabbage and served with a light ginger-soy dipping sauce.

So gather your friends and family around for a “dumpling party” and make these succulent treats to usher in a prosperous new year.

How to make dumplings video

These dumplings are always a hit and are great both boiled or pan-seared. Try substituting ground chicken or minced shrimp as a variation. They freeze well, so be sure to double the recipe to make more.

For the filling, place the cabbage and salt in a large bowl and mix well. Set the cabbage aside for 20 minutes to let the salt leach excess water from the cabbage.

To make the dipping sauce, whisk together the soy sauce, rice vinegar, sesame oil, water, sugar and green onions in a small bowl. Set aside until ready to serve.

In a large bowl, combine the pork, mushrooms, green onions, ginger, garlic, soy sauce, mirin, sesame oil, cornstarch and white pepper and mix well. Use your hands to squeeze all the water out of the cabbage. Discard the excess water, add cabbage to pork filling and mix until well combined.

To make the dumplings, place the dumpling wrapper on your palm, brush water around the edge and fill the center with a heaping tablespoon of filling. Fold the wrapper in half to form a half moon. Use your thumb and index finger of one hand to fold 4 to 5 pleats across the back side of the dumpling, pressing the edges together to seal the dumpling. Gently curve the dumpling so that it sits up when placed on a flat surface. Place the finished dumplings on a baking sheet lightly dusted with cornstarch and cover with a damp towel. Repeat with the remaining wrappers and filling. (To serve at a later date, freeze the dumplings in a single layer until they are hard and then transfer to a sealable plastic bag. Steam the dumplings directly from the freezer for 10 minutes.)

To cook the dumplings, heat a large non-stick skillet over medium heat. Add 1 tablespoon of vegetable oil to the hot pan. Place 8 to 10 dumplings in the pan and brown the bottoms until golden brown, 1 to 2 minutes. Add 1/4 cup water to the pan, cover with a lid and steam until all the water evaporates, 6 to 7 minutes. Transfer the cooked dumplings to a warmed platter and cover with foil. Cook the remaining dumplings and serve warm with the soy-sesame dipping sauce. 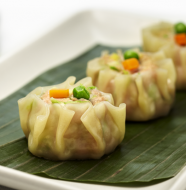